Our world and everything that exists on it. 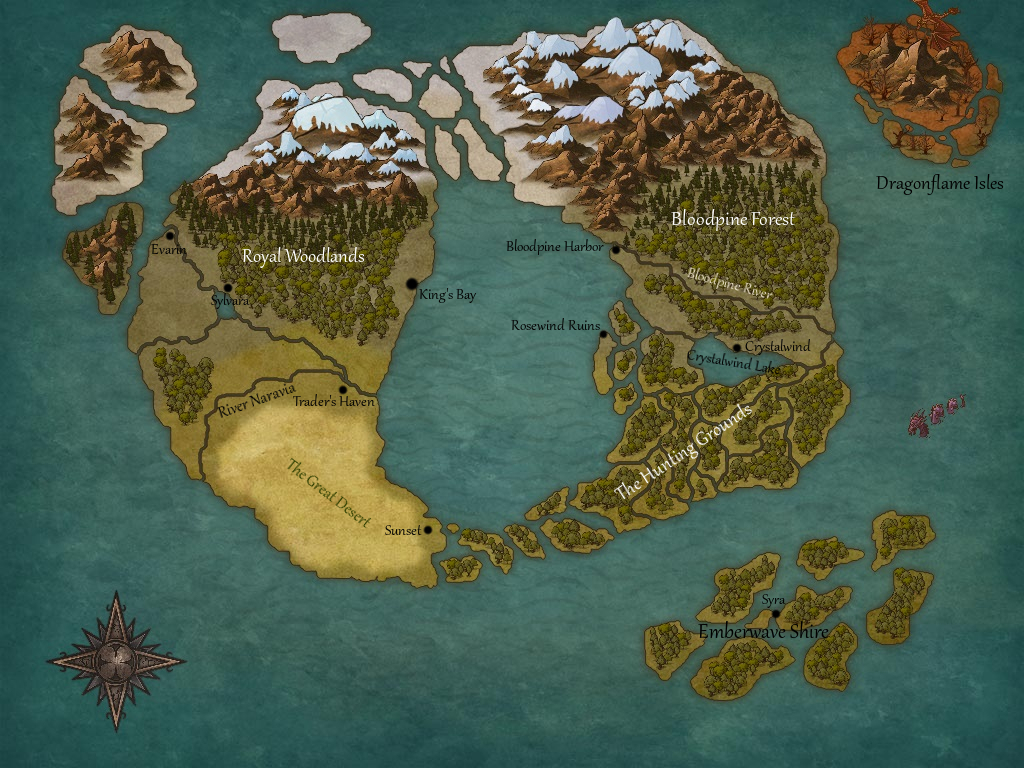 King's Bay and the Royal Woodlands

As the seat of the King, it is no wonder that the aptly named city of King's Bay is not only the largest city man has built thus far, but also the biggest and most central harbor in the kingdom. The city itself is an impressive sight to behold, with noble houses surrounding the great royal palace, each trying to capture even a fraction of it's beauty let forever remaining in it's shadow. further in the distance one may see busy trade districts and finally, far out of sight from the palace in the center, the decrepit huts of the poor. The soil past the city limit is used as farmland, reaching far further than the eye can see, supplying the residents with everything that can be grown.
The port itself is equally awe-inspiring, with merchants shipping in and out at all times, visitors landing on intricately decorated vessels, mercenaries waiting for work to send them off to all corners of the world, ... and further south, an entire section of the harbor is marked off for the military only. Here one will often find children, fawning at the gates over the enormous battleships that lay idle here. This part is used far under it's capacity, as at most a few ships come and go every day, moving troops, or relocating prisoners.

If one were to travel to King's Bay by land, it would almost be unavoidable to cut through the Royal Woodlands, the forest spanning the entire area from the great river in the south, to the mountains in the north. These woods are in their entirety considered property of the royal family and as such, hunting in them without permission from the King himself is strictly prohibited, though one may take the word "strictly" with a grain of salt, as the King has neither the manpower, nor the will to enforce this rule throughout the entire forest.
While it will likely take significantly longer to cross the woodlands than to enter the city through the port, it is a rather pleasant journey. The paths are well kept and one will seldom find oneself in the dark, as the moonlight easily finds its way through the leaves at night. Though it is possible to find boars, as well as wolves and rarely bears here, they will mostly keep away from the more traveled roads.

What King's bay is to the west, Bloodpine Harbor is to the east. While it is not nearly as big as the royal city, nor the old eastern trade port or Rosewind, it was found to simply be easier to expand the existing city, than attempt to rebuild what was now barely more than rubble. Nonetheless, it holds it's name as the only port on the eastern continent large enough to harbor vessels capable of crossing the waters straight to the west, rather than having to spend weeks trailing the coast, as well as sailing the ocean south towards the islands of Emberwave.

One might wonder what causes the city to struggle to grow as much, despite its far better positioning than Rosewind could ever have dreamed of, considering the calmer waters it is set in, as well as the river connecting it directly to the eastern shore, but since its founding, Bloodpine Harbor has always been limited by the woods surrounding it. On first glance Bloodpine appears to be just as pleasant as the Royal Woodlands in the west, but it's history tells a different tale.
More often than not, its first impression will hold true and a journey through the woods will remain uneventful. Ever so often, however, Travelers will get horribly lost without warning, with even entire military units disappearing into the forest for weeks and reappearing in a location entirely opposite to their destination, with some less equipped travelers not finding their way back out at all, mostly due to them falling to wild animals when veering off the paths. Many believe the woods to be cursed or haunted and very few dare to hunt or cut trees in them, out of fear of angering them even further, forcing the Bloodpine Harbor to import far more than they should need to.
The only ones quite glad about this are the traders of the city of Crystalwind in the south, as they are given free access to the port in exchange for supplying it with fish and lumber.

After nearly a century of being hunted, there is only one thing allowing the mages to persist. A hidden city, only able to be found by mages, for them to find safety, treat their sick and injured, and teach their arts. Ever since they first learned of it's existence, the inquisition has tried - and failed - to locate this place, as not even those who have been visited it know how to find it.
It is a place built in secret, after the great war, each warden protecting it with one seal to keep it hidden from anyone who may wish to bring harm upon it.
Lady Lucilia placed the seal of the lost, causing those not meant to find the city to stray from their path until they have passed.
Lady Vita the seal of protection, for nature itself to shield it from unwelcome gaze.
Lord Andrej the seal of beckoning, calling in all those who may need to find it.
Lady Luna the seal of madness, driving anyone insane who dares force their way into the sanctuary.
And lastly, Lord Damien the seal of the forgotten, never allowing anyone to even vaguely remember the city's location or any details surrounding it.

The mage sanctuary itself does truly live up to its name. With all its residents coming there to escape being hunted in the kingdom, it is incredibly peaceful. With the exception of very few old, yet lovingly kept up buildings, micha mainly consists of temporary shelters, set up by those just coming there to stay briefly.

South of the eastern continent lie the islands of Emberwave Shire. Has it long ago stood under the - more or less - watchful eye of a since forgotten countess, it is now controlled by the Inquisition, which the population at large found to be quite the improvement. While the countess had been mostly preoccupied by expanding her castle and hand picking the boys she most fancied from the surrounding villages to staff it, the inquisition once again brought order and safety to the islands and, more importantly, cleansed them from magic entirely.

The Islands themselves are outright idyllic, if awfully windy. With the surrounding sea keeping temperatures relatively even and causing frequent rainfall, the landscape is able to remain green at all times. In the evenings, the sun reflects a strong fiery red glow off the water, bathing the shire in its light and giving it its name. Due to the forests benefiting hugely from the local climate, it is quite difficult to expand settlements, leaving Syra as the only city in the shire. Originally not much more than a town constructed around Emberwave castle, the massive stronghold built high up on a cliff, looking over the bridge that connects two of the islands. Given its purpose, one would think that the stronghold would be looming over the city built in its shadow but it bears remembering that it was built by a rather eccentric countess, making it a nigh breathtakingly beautiful sight, with bright, intricately built rooms winding all the way down the almost 300 meter height of the cliff, finally leading into the massive port that single-handedly makes life in Embershire possible, as it is here the large high sea ships are able to dock, to allow for trade with the mainland.

Re: The World Map